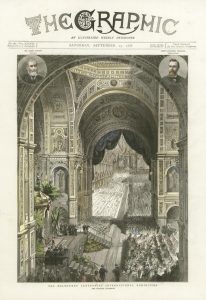 [comparative photo: cover of the 13 Sept.1888 issue of The Graphic, showing the opening of the Melbourne Centennial Exhibition]

Established in 1869, The Graphic was a significant platform for black and white illustrators of the period, continuing weekly publication until 1932.

Founded to compete with the established Illustrated London News, it attracted many of the best graphic artists of the day, and is also known to have been admired by other artists, including van Gogh (who later recalled his pleasure at viewing each week’s illustrations in the windows of the magazine’s offices in The Strand, when he lived in London, 1873-75).

The magazine recorded various aspects of contemporary society and events, including major military conflicts of the period, especially the Serbo-Turkish War (1876-78) and the Zulu War (1879-96). In an era when in situ photography was still a somewhat laborious business, illustrators played a key role in producing arresting images of such events.

A series of original drawings produced for the magazine was purchased from the Melbourne International Exhibition in 1881 (see list below). Fripp’s drawing was donated by the magazine, presumably in recognition of Melbourne’s purchases. Several of these sketches had already been shown in Sydney and Brisbane in 1879 and 1880 respectively (see Maynard 1980).

The sketch by Hodgson, not one of the group acquired in 1881, but purchased later, also appears to have been a preparatory drawing for an illustration published in the magazine in 1876.

Other artists represented in the pre-Felton collection who worked for The Graphic included Samuel Waller (see Waller Jealous 1875 {1875} NGV [PA]) and Phil May.

Works included in this catalogue originally produced for The Graphic:

Copies of the magazine may be consulted online: see https://archive.org/details/graphicillustrat1907unse/page/n8. For general information, see also https://en.wikipedia.org/wiki/The_Graphic (noting other sources)

For informative comments on the coverage of the Turkish-Serbian war by British journalists and artists, see https://research.kent.ac.uk/victorianspecials/exhibitionitem/turkish-serbian-war-1876/ (focussing on another Graphic artist, Frederic Villiers)

For van Gogh’s admiration for the magazine, quoting an 1883 letter, see https://www.vangoghroute.com/england/london/the-illustrated-londen-news-the-graphic/ (accessed 3 April 2020), also reproducing the 1888 cover illustrated above