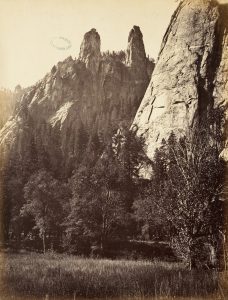 Watkins, a native of New York, moved to California in 1851 in search of gold, and then took up photography. His iconic views of Yosemite (produced from 1861 onwards) proved a crucial step towards the area being declared “inviolable” in 1864, spurring the subsequent formation of the US National Park system.

Later, Watkins underwent a series of reverses. In 1874, he lost control of his business to creditors who circulated inferior copies of his work. And in 1906 his entire collection of original plates and prints, which had been promised to Stanford University, was lost in a fire during the San Francisco earthquake.

The NGV’s annual report for 1871 notes the purchase of 26 “Views of California” (14 mounted on card, and 12 unmounted), indicating that they were bought directly from Watkins himself. A group of 12 “Views in California and Oregon” (photographer not named) is listed in the 1872 annual report as “sent by Sir Redmond Barry” and received in January of that year; these were presumably the unmounted prints listed in 1871.

The current SLV catalogue lists 19 prints by Watkins, showing views of Oregon and the Columbia River, as well as Yosemite, all dated to c.1861-71, and described as presented by Mr Frederick Wright in 1871. The extant prints are all in good condition, aside from the unfortunate addition of a “Melbourne Public Library” stamp in the sky of each one.

Watkins also produced photos in the “stereo” format, although the world’s major manufacturer of such images at the time was Kilburn Brothers (based in Littleton, New Hampshire, active 1865-80): see now *Unknown Stereoscopic views of America etc. {c.1860} Loc? [PH] and *Unknown 600 views of scenery in the USA {1879} Loc? [PH].

The sizes indicated in AR 1871 and 1872 are 10 x 21 inches and 20 x 16 inches, the latter correlating quite closely with the average size of about 40 x 52 cm for the extant photographs: see now SLV online catalogue (all illustrated), including cross-reference where appropriate to other copies of each print

For Watkins, see http://www.carletonwatkins.org/ and further references cited in the SLV catalogue. Two further prints of Yosemite (both dating from 1866) were purchased by the NGV in 1979: see http://www.ngv.vic.gov.au/explore/collection/artist/2271/