A print listed in both NGV 1865 and AR 1870-71 as an anonymous engraving of “Church of England Grammar School,” is identified here, provisionally, as the image of Melbourne Grammar School from Victoria Illustrated (after Gill), first published in 1857 (2nd ed., 1862). 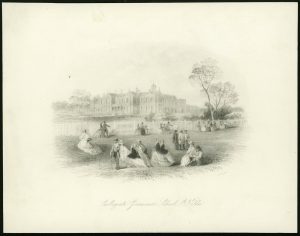 The State Library holds the complete 2nd edition of Victoria Illustrated (acquired after 1905?): plate 21 reproduced here. Implausibly, the engraver relocates the scene to the English countryside (a characteristic of the series criticized by Australian contemporaries).