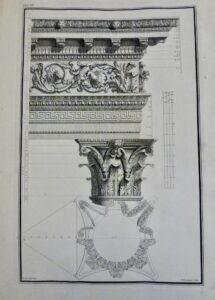 In 1750-51, Wood, an antiquarian, travelled in the Eastern Mediterranean with several companions including the Italian architect and draftsman G.B.Borra (1713-70). Their trip resulted in these two large-scale volumes, apparently purchased together for the MPL.

Each book comprises a suite of engravings, 57 in the Palmyra book, and 46 of Baalbek (some folded). The designs of the plates are credited to Borra, with the engraving divided mostly between Thomas Major (overviews and some details) and Paul Fourdrinier (responsible for the plans and some of the more refined details).

Both books are regarded as among the first systematic (rather than simply picturesque) illustrated publications of ancient buildings, and are said to have been influential on subsequent interior decoration in England and Italy.

The illustration shown here is from the copy of the Palmyra volume in the Royal Collection: see https://www.rct.uk/collection/1071056/the-ruins-of-palmyra