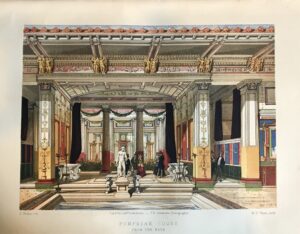 Wyatt, who practised as an architect, was appointed secretary of the Great Exhibition of 1851, and supervised the impressive related publication Wyatt Industrial Arts of the Nineteenth Century 1853 {1861} SLV [IB].

The present book commemorated Paxton’s structure as re-erected at Sydenham, illustrated by 24 lithographs by and after noted artists and architects of the day. The chromo-lithograph reproduced here shows a view of the Pompeian court designed by Wyatt himself; the print is noted as after Delamotte (1820-89), a British photographer and illustrator noted particularly for his photographs of the reconstructed Crystal Palace.

Wyatt was also one of the major contributors to the two series of explanatory handbooks to the Fine Arts Courts of the Sydenham building, also published in 1854, and acquired for the Melbourne Public Library in 1858, but not catalogued separately here, as they were not significantly illustrated. However, the books clearly formed an important influence on several aspects of the early development of the Melbourne art collection, especially the plaster cast collection (refer general Bibliography, under Fine Arts Courts).