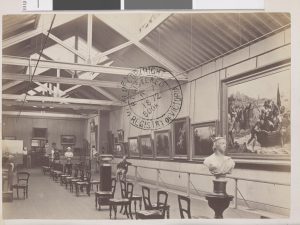 This photograph (one of a pair) documents the appearance of the Public Library’s temporary picture gallery as it appeared between c. 1865 and 1875.

The two photographs are listed in the SLV catalogue as transferred from the Victorian Patents Office, 1908