Baxter exhibited regularly at the Royal Academy from 1834 onwards, pursuing what the NGV 1894 catalogue, in its entries on the two works below, describes in lukewarm terms as “a struggling career as a painter of portraits and miniatures” (these comments were almost certainly penned by Bernard Hall).

The pair of female portraits acquired for Melbourne in 1864 later received adverse criticism, and the second work was  auctioned off in 1941. 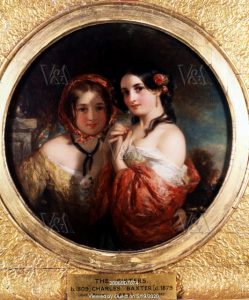 For the two works bought for Melbourne in 1864, see Galbally, First Collections (1992), cat.3 (with further references).