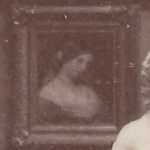 This painting, visible in early photos of the old picture gallery of the Public Library, as shown here, was later de-accessioned and sold through Melbourne auctioneers Leonard Joel’s in 1941. Its companion painting remains in the NGV collection: see Baxter Rose of England 1861 {1864} NGV [PA].

Bénézit mentions the 1970 London auction of a painting by Baxter called “Young Woman with Rose” – possibly identical with the present work. The photo reproduced above seems to suggest a younger subject than the other painting (as does the ‘bud’ of the title).

For a comparable double portrait by Baxter, see artist entry.