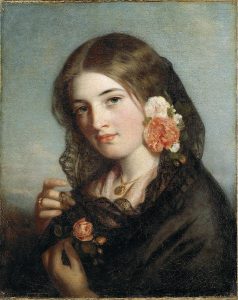 This picture and its twin (* Baxter Rosebud of England 1861 {1864} Loc? [PA]), described in the 1864 English Art Journal as “fancy female portraits,” were among the earliest paintings acquired for Melbourne on behalf of the Commissioners of Fine Arts for Victoria. The advisor in this case was Clarke, whose background seems to have been largely military (see linked entry).

Although praised on their arrival in Melbourne, the two paintings were derided later as “daubs” (press comments quoted by Ann Galbally in the First Collections catalogue).

From 1894, both works were on loan to regional Victorian collections, and the companion painting was eventually de-accessioned, presumably on the basis that one was enough.

See (with details and reproduction as shown here); and Galbally & others, The First Collections (1992), cat.no.3 (with further references, including the quote from the Art Journal, Dec.1864; Galbally notes that the present painting was originally known as The Rosebud)