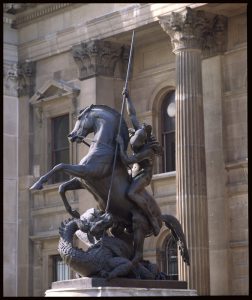 First shown at the Royal Academy in 1887, this group was purchased for £1,000 from the 1888 Centennial International Exhibition held in Melbourne, together with Boehm Young Bull {1888} Melb. Showgrounds [SC].

Shane Carmody, in a witty and illuminating study (2011), draws attention to the fact that the patron saint of England is shown here – uniquely – almost completely naked, apparently reflecting classicizing taste influenced by the Elgin Marbles. An
engraving published in 1878 shows the figures essentially as they appear in the Melbourne statue.

This work may also reflect British interest in the “martial saint” during the period of conflict with the Boers (between 1880 and 1902). A few years later, Baden-Powell, a hero in South Africa, chose St George as the patron saint of the new Boy Scout movement (1908).

The 1894 NGV catalogue includes a photograph showing the St George group on a stone plinth on the north lawn in front of the public library, but the statue was later moved to its present position at the top of the library steps. It is matched on the right by Frémiet’s Joan of Arc, acquired in 1907, on the advice of Bernard Hall, following several efforts, dating back to 1890, to commission a suitable companion for St George: see now * Mackennal Triumph of Truth {1891} Loc? [SC].

Carmody “The Naked Saint” (2011) – for full details, refer Bibliography – includes detailed discussion of the Trustees’ efforts to commission a companion statue. See also http://guides.slv.vic.gov.au/c.php?g=245295&p=1633312. The photograph reproduced here, taken in 1988 by Adrian Flint (b.1960), is held in the SLV (H2010.25). For the 1878 engraving, published in the Magazine of Art Illustrated, see e.g. http://www.fromoldbooks.org/Cassell-MagazineOfArt/pages/337-St.-George-and-the-Dragon/

For the history and iconography of St George, see e.g. Samantha Riches, St George: Hero, Martyr and Myth, Thrupp: Sutton Publishing, 2000, esp.pp.194ff., noting the focus on the saint during the period of the Boer Wars (1880-81 and 1899-1902); and Giles Morgan, St George: Knight, Martyr, Patron Saint and Dragonslayer, Harpenden: Pocket Essentials, 2006, esp.p.112, on Baden-Powell. For Frémiet’s Joan of Arc – an early Felton Bequest purchase, hence not included in the present catalogue – is a replica of his 1874 statue in Paris: see now Ted Gott, “An iron maiden for Melbourne: the history and context of Emmanuel Frémiet’s 1906 cast of Jeanne d’Arc,” The La Trobe Journal, no.81 (Autumn 2008), pp.53-68, available online