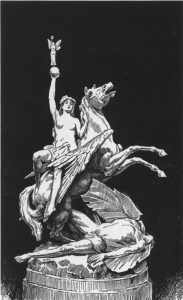 Noting this purchase, the NGV’s Annual Report for 1891 indicates that it received second prize (£100) in a competition to find a companion for Boehm St George 1887 {1888} SLV [SC]. In fact, no first prize was awarded, possibly due to lack of funds. The sculptor, apparently disgruntled by this decision, left soon afterwards for Europe.

The Melbourne Argus listed all 14 competition entries on 7 July 1891, describing Mackennal’s model in some detail, as follows: “A female figure seated on a winged horse, and holding aloft an image of Victory poised on an orb, and sustaining the laurel crown. Error lies prostrate on the ground. All three of the figures are finely modelled, and each is full of life and movement.”

A wood engraving published in the Illustrated Australian News (reproduced here) gives what appears to be a fairly reliable impression of Mackennal’s proposal, clearly designed to work in counterpoint to the twisting forms of Boehm’s St George (as John McDonald has pointed out).

The poses of horse and rider also echo Antonin Mercié’s Genius of the Arts (Paris, Louvre, 1877), which was probably the basis for another plaster model acquired for the Melbourne collection in 1891: see now * Mercié Triumph of Art {1891} Loc? [SC].

Unfortunately, Mackennal’s plaster model is no longer in the collection, and presumably lost. It is listed in NGV 1894, but not NGV 1905, suggesting that it may already have been de-accessioned or damaged by that date.

Sarah Bernhardt, visiting Melbourne for a celebrity engagement at the time of the competition, praised Mackennal’s composition as “simply magnificent in taste, composition, arrangement and executive skill” (quoted in the Argus, 11 July 1891). Predicting that if the sculptor went to Paris and realized it in bronze or marble, the famous actress went on, it would “place him on the high road to fame and fortune.”

Two related works, both produced shortly after the sculptor returned to Europe, should be mentioned here: his profile portrait of Sarah Bernhardt (bronze relief, c.1892-3); and Truth, a bronze statuette completed in 1894, featuring a standing female nude not unlike the Victory statuette held aloft by Truth in Mackennal’s 1891 model, and also reminiscent of Circe (1893).

Eventually, in 1907, a suitable counterweight to Boehm’s statue was acquired, the replica of Frémiet’s St Joan bought with funds from the new Felton Bequest, and installed outside the Library, where it remains.

The Art Gallery of New South Wales holds casts of both the Bernhardt portrait and Truth (refer online catalogue); for the latter work, see also Bronwyn Watson in The Weekend Australian, 29-30 September 2018 (many thanks to Peter Hutchinson for alerting me to this article). For Frémiet’s Jeanne d’Arc, see details and ref.noted under Boehm St George 1887 {1888} SLV [SC]; and for Circe, see the linked artist entry on Mackennal