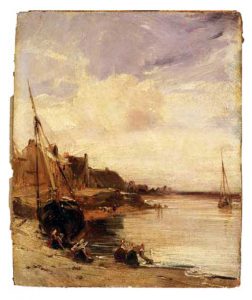 A precociously talented painter, Bonington relocated to Paris from England with his family while he was still a youth. He was mourned by various contemporaries,  including Corot and Delacroix, after his untimely death from tuberculosis, just before his 26th birthday.

This characteristic oil sketch was acquired by Felton, shortly before his death, from the estate of William Lynch (Dec.1903). Daryl Lindsay later described the work as a “little masterpiece,” one of only three “items of aesthetic value” in Felton’s entire collection, in Lindsay’s view – the other two being watercolours by Buvelot.

Unfortunately, Bonington’s small work was mislaid during the redevelopment of the NGV’s St Kilda Road building in 1999-2003, and eventually reported “missing presumed stolen” in 2011.

Despite its later reputation, the present work was valued at only £31/10 in 1904, for the purposes of probate – compared, for example, with Beavis Charcoal Burners 1874 {1904} NGV [PA], at £210. Nor is this work included in the complete catalogue of Bonington’s paintings by Patrick Noon (2008), although this may reflect concerns regarding its whereabouts. Noon does list several of the NGV’s works on paper by Bonington (acquired later).

Two other Bonington paintings, not selected for the NGV, were listed in the catalogue of the auction of Felton’s remaining artworks in April 1904; one, a sketch, sold for £15, and the other, “possibly of doubtful attribution” (according to Lindsay), for only £11.

For this painting, see Poynter, Mr Felton’s Bequests (2003/2008), pp.201 and 631, quoting a reported remark by Felton, shortly before he died, to the effect that the works he bought at the Lynch sale were intended “for the public.” Poynter, pp.246-7, also quotes the comments by Daryl Lindsay, including his remarks on the April 1904 auction, from the latter’s 1963 book on the Felton Bequest.