This work, still in the Castlemaine collection in 1983 (when it was described as a gift from the NGV in 1943), was clearly identical with the bronze “figure” by Carrier-Belleuse acquired for Melbourne from Felton’s estate in 1904. 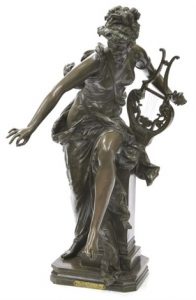 Several other bronze casts by Carrier-Belleuse, showing Melodie as a seated female figure holding a lyre, have appeared on the international art market recently (see comparative photo). One of these may even be identical with the bronze Felton owned.

See now A Collection of Australian Art, Castlemaine Art Gallery, 1983, p.48 (details as listed; not illustrated). Many thanks to Dr Chris McAuliffe, a member of the Castlemaine Art Museum board, for advising on the history of this work and the 1987 auction, held at Sotheby’s on 29 June 1987; besides the works by Carrier-Belleuse and Flaminio, which fetched $6,000 and $4,200 respectively, a “large bronze figure of Mercury” (possibly another work previously in the Melbourne collection) was sold for $6,000. McAuliffe comments that, besides the logic of deaccessioning non-Australian works, the funds gleaned from this sale probably helped with funding a building extension at the time (email correspondence, August 2018)