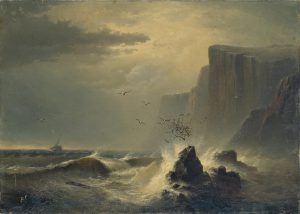 NGV 1894 and 1905 both list the title of this work as “Cape Gris Nez, North Coast of France,” and call the artist Eugene Cecchini.

Sea Coast in Brittany, auctioned in the USA in January 2015, clearly shows the same stretch of coastline. Various other land/seascapes by Cecchini, who was born in Venice, have appeared at auction in recent years, including several striking views of Venice by night.

The donor, mayor of Melbourne at the time (see donor entry for details), also gave several historical works on paper to the Melbourne collection in 1882 (see e.g. Hodges Party of Maoris in a canoe 1773 {1882} SLV [DR]).