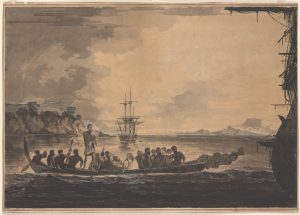 This was one of several prints and drawings relating to Captain James Cook’s voyages, presented to the Melbourne collection by Ham, mayor of Melbourne from 1881-82 (see linked entry for further details), who apparently purchased them from a local descendant of the explorer.

The works donated in 1882 included four drawings then attributed to John Webber, three of them (including this one) now correctly re-assigned to Hodges, the principal artist on Cook’s second voyage of 1772- 75. The fourth drawing, * Hodges or Webber (?) Native of Otaheite {1882} Loc? [DR], no longer extant, may have been by either artist (see entry for details).

The present drawing shows the prelude to a meeting between Cook and local leaders in Queen Charlotte Sound, New Zealand, on 4 June 1773, as recounted by George Forster in his record of Cook’s second voyage.

See SLV online catalogue entry, with details and reproduction (as A Group of Maoris in their Canoe), also including information on the donor and provenance of this drawing and the others in the group. See also Joppien, “Three Drawings by William Hodges,” (1976), esp.pp.27-28, quoting Forster as noted above; and Joppien & Smith, Art of Captain Cook’s Voyages (1985), vol.2, pp.50 (pl.42: a good colour photo) and 154, cat.no.2.34: titled as indicated here