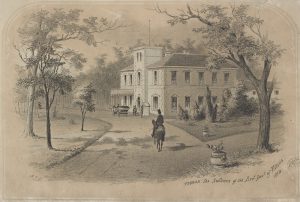 Toorak House, built in 1849 for a local merchant, James Jackson (who died at sea in 1850), was the official residence of Victoria’s governors from the early 1850s until the completion of the present Government House (built to the design of William Wardell between 1871 and 1876).

The building is now owned by the Swedish Church.