Copeland & Sons (after others)
The Prince and Princess of Wales
Parian busts
Presented by the Art Union of London, by 1871
Present collection unknown

In the absence of further information or photographs, it is difficult to be certain of the precise identity of these two busts, listed as shown above in AR 1870-71, since several different Parian busts were produced by W.T.Copeland for the Crystal Palace Art Union, both at the time of the marriage of the royal couple in March 1863, and in subsequent years. 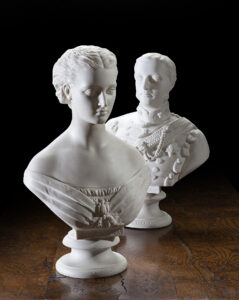 The most likely possibility appears to be that they were examples of the two busts reproduced here, a pair auctioned in London in 2011, both dated 1864. The bust of Albert Edward in uniform was based on a sculpture by Morton Edwards (1834-1917). The source of the figure of Princess Alexandra, first issued in Parian in June 1863, appears to have been a marble bust by Mary Thornycroft (1809-95), a member of a dynasty of sculptors which included her father John Francis (see Francis Lord Melbourne 1837 {1901} SLV [SC]), her husband Thomas (1815-85), and her son Hamo (1850-1925).

Alternative possibilities are a Parian bust of Albert Edward after Marshall Wood, issued in 1863; and one of Alexandra after Felix Martin Miller (1820-80), dated Feb.1863 (an example was auctioned in Sydney in Feb.2018). These were also produced by Copeland for the Art Union at the time of the royal marriage.

[photo: Parian busts auctioned together in 2011]

AR 1870-71, p.28, under “Busts and casts of busts” (this consolidated report surveyed the development of the collections of the Library, Museum and National Gallery from their inception to 1870)

For the pair of busts reproduced here, see https://www.lyonandturnbull.com/auction/lot/107-art-union-of-london-after-morton-edwards/?lot=123237&sd=1# (auction of the Forbes Collection at Old Battersea House, 1 Nov.2011, lot 107; as 36.5 and 39 cm respectively; both listed as after Morton Edwards). For the bust of Albert Edward after Edwards, see also https://www.ebay.co.uk/itm/1864-Prince-Albert-Edward-Copeland-Parian-Bust-/143603478719 (with good photos including details of relevant inscriptions).

For the Copeland bust of Albert Edward after Marshall Wood, see https://www.antiquesboutique.com/antique-busts/a-copeland-parian-bust-of-prince-albert-edward-dated-1863/itm16630#.X1VJyUkRU8Y (with references; priced at £425). And for the Copeland bust of Alexandra after Miller, see e.g. https://www.carters.com.au/index.cfm/item/1087539-copeland-parian-bust-of-princess-alexandria-c1863-realistically/ and https://www.antiquesreporter.com.au/index.cfm/lot/1162180-alexandra-princess-of-wales-bust-1863-parian-porcelain-bust-afte/ (example auctioned by Lawsons, Sydney, 22 Feb.2018)