But in 1847, at the age of 55, he foreswore his addiction to alcohol (which had killed his father in 1811), and became a vocal supporter of the Temperance Movement, issuing The Bottle, a set of prints inveighing against drinking. His passionate views on the subject were summarized in the huge painting The Worship of Bacchus (Tate Gallery, 1860-62), a “manifesto for teetotalism” (Trevor Jackson, 2001): see reproduction below.

The full inscribed title of this printed version runs as follows: THE WORSHIP OF BACCHUS, / OR, / THE DRINKING CUSTOMS OF SOCIETY, / SHOWING, HOW UNIVERSALLY THE INTOXICATING LIQUORS ARE USED, UPON EVERY OCCASION IN LIFE, FROM THE CRADLE TO THE GRAVE. Also inscribed, lower left: The Figures outlined on the Steel Plate by George Cruikshank, & the Engraving finished by Charles Mottram.

For a second impression of this print, apparently the one extant in the NGV, see Cruikshank & Mottram The Worship of Bacchus 1864 (c.2) {1868} NGV [PR], one of several prints presented to the Melbourne collection by the Belgian government (see e.g. Unknown after Rubens Descent from the Cross {1868} NGV [PR]). 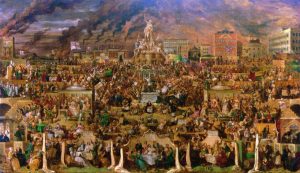 For high resolution reproductions of other impressions of the engraving, and details, see http://www.bacchus.jgoodliffe.co.uk (accessed 1/6/16). For the Tate painting (including discussion of its 2001 restoration), see Robert Upstone & others, George Cruickshank’s The Worship of Bacchus in focus, London: Tate Publishing, 2001 (free download available, and http://www.ncbi.nlm.nih.gov/pmc/articles/PMC1120541/ (by Trevor Jackson, 2001, as quoted above; accessed 1/6/16)

For Cruikshank’s significance in relation to the temperance movement, see the entry on him in Jack Blocker & others, Alcohol and Temperance in Modern History: a Global Encyclopedia, Santa Barbara, Denver and Oxford: ABC Clio, 2003, volume I, pp.179-80 (with further reading) [excerpt available online via Google Books]