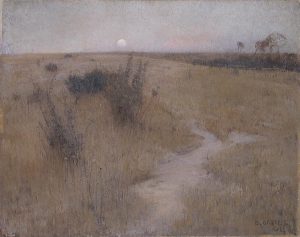 Bernard Hall (NGV Director 1892-1935) has been charged, with reason, with having a “blind spot” when it came to the art of Tom Roberts, whose Shearing the Rams of 1890 was only finally purchased for the NGV, with Hall’s grudging assent, in 1932, the year after Roberts died.

But perhaps there was some unknown personal issue underlying this antagonism, because Hall was otherwise generally sympathetic to the members of the “Heidelberg School,” especially in the 1890s, when he supervised the acquisition of a number of examples of their work: see e.g. Streeton ‘The Purple Noon’s Transparent Might’ 1896 {1896} NGV [PA].

The present canvas was bought from the Victorian Artists’ Society in January 1895, together with Mather Autumn in the Fitzroy Gardens 1894 {1895} NGV [PA]. Bought for only £75, this was the first of Davies’ works to enter the NGV collection; other examples were acquired after 1905.

Davies, born in Ballarat, studied under Folingsby at the National Gallery School (1887-90), and painted with Roberts and Streeton during the same period at Eaglemont, at a property owned by the brother of his future wife. He worked in France and England from 1890 to 1893, and again from 1897 onwards. While in Australia between 1893 and 1897, he became well-known for his “nocturnes” (the title clearly echoing Whistler), of which this is a famous example, evocatively capturing the atmosphere of the bush in fading light.

“This masterwork of Davies ranks with any produced by the Australian Impressionists, and indeed it can be exhibited without apology among works of the French school” (Brian Finemore, 1968).

For this work, see Brian Finemore, Freedom from Prejudice: An Introduction to the Australian collection in the National Gallery of Victoria, ed.Jennifer Phipps, NGV, 1977, p.38 (from his Australian Impressionists, 1968), as quoted above; see also Downer & Phipps Victorian Vision (1985), cat.85 and p.55; and Astbury, Sunlight and Shadow (1989), pp.138-9