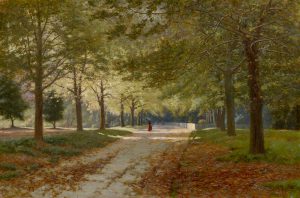 This canvas, the first of several works bought for the Melbourne collection from Victorian Artists’ Society exhibitions in 1894-5, on Hall’s advice (see e.g. Humphrey Under a Summer Sun 1895 {1895} NGV [PA]), was reproduced in the 1905 NGV catalogue.

Leonard Cox (1970) claimed that Hall opposed its purchase – on the grounds that a painting by Mather was already in the collection, and that such duplication should be avoided. However, Cox may have confused this work with Mather Wintry Weather, Yarra Glen 1895 {1895} NGV [WT]. As John Poynter notes, Hall and Mather often crossed swords in committee regarding purchases of works by others, but this seems to have arisen from general differences of taste and personality. For further information on Mather, see linked artist entry.