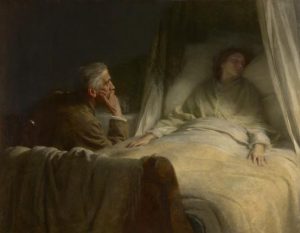 In this exemplary late Victorian image, “intense feeling” is clearly to the fore, as Herkomer emphasized in recommending it (as quoted in NGV 1894).

Australian art historian Bernard Smith, bemoaning the appetite for sentimentality in English (and Australian) art in the Victorian era, in his Place, Taste and Tradition (1945), saw works like this as marking “the nadir of Victorian taste,” exciting a “form of debilitated sadism”! One see Smith’s point, although he later retreated from some of his more acerbic judgements on Victorian taste.

The emotional dimensions of this work may also echo Rembrandt (particularly his images of his dying wife Saskia), and this would presumably also have added to Herkomer’s appreciation of this painting. In the same year, Herkomer recommended a group of the Dutch master’s etchings to Melbourne: see now Rembrandt 11 etchings {1891} NGV [ET].

Dicksee became a member of the Royal Academy in the year this work was painted (for further details, refer artist entry).


Rembrandt’s wife Saskia, who was often bedridden from 1635 onwards, and died in June 1642 (aged 29), was the subject of many of the artist’s drawings and a few etchings during the period, including a sketch of a woman asleep (possibly Saskia), on the verso of a sheet of studies of c.1635, acquired through the Felton Bequest in 1936 (NGV inv.no.356/4): see Gregory & Zdanowicz Rembrandt (1988), pp.45ff (reproducing several comparative examples). See also Ben Broos in Albert Blankert, Rembrandt: A Genius and his Impact (exh.cat.), NGV, 1997, pp.334 (cat.75: the Melbourne sheet) and 348 (cat.82: a poignant drawing of Saskia near the end of her life [Ashmolean Museum, Oxford])