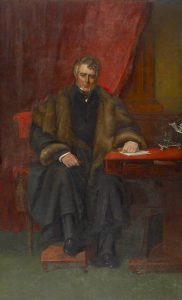 William Lamb, 2nd Viscount Melbourne (1779-1848), was British prime minister in 1837, when Port Phillip was settled and the city named after him. He became a mentor to Queen Victoria, who ascended the throne, also in 1837, at the age of 18. The pre-Felton NGV collection also included a marble bust of the sitter, acquired in 1901: see Francis Lord Melbourne 1837 {1901} SLV [SC].

Inscriptions on the reverse of the canvas provide additional information: “…painted by R Dowling / London 1884 / Head from a miniature / by Partridge in possession / of Lord Mount Temple / Dress as worn by Lord Melbourne / in his Study…” Of several extant images of the sitter by Partridge, the closest would appear to be a half-length seated portrait in the National Portrait Gallery, London, dating from 1844.

Dowling evidently painted this work shortly before returning to Australia, after working in England for many years (see artist entry, for further details and references).

See also separate linked entry for the donor, who presented the four monumental statues of the royal family by Charles Summers to the gallery in 1878.