Both the 1894 and 1905 NGV catalogues list this print as donated by George Collins Levey in 1879, a logical enough presumption, since his gift did include all the other engravings in the consolidated Tableaux du roi group, as listed in 1727 (see Levey gift, cat.1-38).

However, the gallery’s impression is clearly stamped as donated in 1868 by Fawkner (one of Melbourne’s pioneers). Given that earlier gift, it would appear that Levey or his NGV advisors decided against including an impression in the 1878-9 purchase and donation.

The authorship of both this engraving and the source painting have also been the subject of confusion in the past. Modern authorities clearly accept Gérard Edelinck as the engraver (NGV 1894 and 1905 both indicate that his brothers Jean and Gaspard, also engravers, were responsible, but there seems little basis for this theory).

The painting reproduced (c.1614-15, Paris, Louvre; acquired by Louis XIV in 1662) is by Turchi, who was born in Verona, and hence was sometimes referred to in the past as Alessandro Veronese or “Alex.Veronèse” (thus Duplessis 1869), occasionally leading to the incorrect identification of the author as the great Venetian Renaissance painter Paolo Veronese. 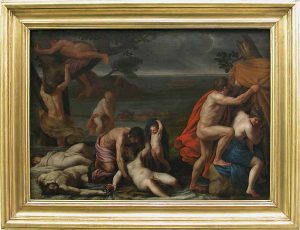 For the NGV impression, see https://www.ngv.vic.gov.au/explore/collection/work/37265/ (as by an unknown engraver after Paolo Veronese; not reproduced). Another impression was for sale in 2015: see http://www.ebay.ca/itm/26874-Antique-200-years-old-print-etching-of-Alessandro-Turchi-1578-1649/  (with reproduction; accessed 15/6/15). For Gérard Edelinck, see linked artist entry (also mentioning his brothers)