The image recorded as acquired for the Melbourne collection in 1868 was probably an impression of the lithograph published by James Blundell in 1856. The SLV holds another impression (reproduced below), recorded as donated in 1934; and also the version made for Victoria Illustrated (1857), engraved by Tingle after Gill.

Melbourne’s first post office, a bark hut in Collins Street, was superseded by the Bourke Street structure shown here, and then in 1867 by the much grander General Post Office, on the corner of Bourke and Elizabeth Streets (now a retail centre). 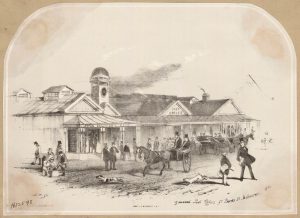