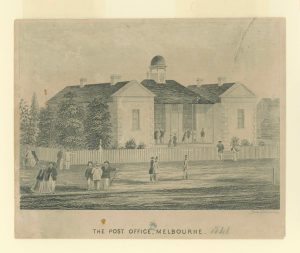 Two different images of this building are listed among the considerable number of works acquired for the Melbourne collection in 1868 (many of them donated by Fawkner).

One, listed as by an unknown artist, is provisionally identified here as the SLV engraving by Thomas Ham, catalogued as “added to collection c.1931.” The date 1841, added in pencil, probably refers to the date of the building, which replaced an earlier structure from the 1830s.

For further information and references on Melbourne’s first post offices, see the Gill print mentioned above