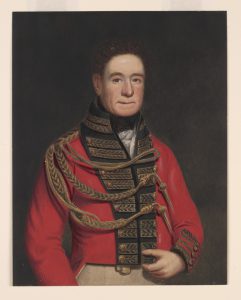 Macquarie, NSW Governor 1810-21, succeeded Bligh and Johnston: see Jackson Colonel Johnston 1873 {1873} SLV [WT]. This image, based on a portrait previously thought to be of Macquarie, in the Windsor courthouse, NSW (designed by Francis Greenway, 1822), was apparently the direct source for the portrait of Macquarie in Melbourne’s “Oval portrait” series.

Traditionally regarded as a key figure in the development of New South Wales beyond its penal-colony origins, Macquarie gave significant positions to a number of emancipists (pardoned convicts), notably Dr William Redfern as colonial surgeon and Greenway as government architect. He also superintended extensive public works, and generally improved the young colony, although his expansive expenditure, at odds with the vested interests of early settlers, eventually led to British discontent, and Macquarie’s resignation.

However, the previously accepted view of him as an enlightened and humanitarian figure has also been subjected to close critical scrutiny recently, especially in relation to his role in the treatment of the Aborigines, described in the past as relatively benign. Historians and commentators point particularly to documented evidence of his having ordered punitive military action in April 1816, resulting in the deaths of at least 14 Aborigines, and his subsequent “Proclamation of Assimilation” (4 May 1816), leading to a description of him in 2015 as “The Father of the Stolen Generations.”

For this work, see SLV online catalogue entry (details and reproduction as shown here). According to modern scholars, other portraits held in the Mitchell Library probably provide a more faithful likeness of Macquarie: portraits by Read and (?) Opie, and an 1810 miniature (Mitchell Library, P2/144, ML 37 and MIN 71 respectively): for details, refer the State Library of NSW’s catalogue (and, for the miniature, see http://www.migrationheritage.nsw.gov.au/exhibition/objectsthroughtime/lachlan-macquarie-portraits/). For remarks on portraits of Macquarie, see also https://www.mq.edu.au/on_campus/library/about_us/lachlan_elizabeth_macquarie_room/family_portraits/

For the established view of Macquarie and his achievements, see http://adb.anu.edu.au/biography/macquarie-lachlan-2419 (by N.D.McLachlan, ADB vol.2, 1967). But compare e.g. http://nationalunitygovernment.org/content/governor-macquarie-father-stolen-generations-1815 (reprinting a Sydney Morning Herald article published on 22 Jan.2015); and https://www.abc.net.au/news/2017-09-27/fact-check-did-lachlan-macquarie-commit-mass-murder-and-genocide/8981092?nw=0 (posted 27 Sept.2017) [both sites accessed 13 July 2020]