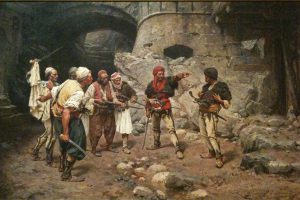 The NGV’s online catalogue gives the nationality of the artist (also known as Jovanović, Joanovitch, Joanovits etc.) as “Austro-Hungarian,” indicating that he was born in Versecz, Serbia, and died in Vienna. He specialized in narrative and Orientalizing subjects, with treachery a recurrent theme.

The dramatic subject and its staged treatment bring to mind operas of the period such as Mascagni’s Cavalleria Rusticana (“Rustic Chivalry”), based on a story about feuding peasants by Giovanni Verga, and first performed in Rome in 1890, the same year this painting was bought for Melbourne. A reproduction of it appears in a recent internet article on Montenegro, including discussion of traditional blood feuds, codes of honour, and so on, dating back to the era of Ottoman Turkish rule over Montenegro, and only moderated in the modern era. (See also Bai after Germak La Monténégrine {1868} NGV [PR]).

This work, purchased in Melbourne from H.Koekkoek, was voted by 1906 visitors the sixth-most popular work in the NGV, in an interesting poll published in that year’s Annual Report; the top vote went to Thompson Quatre Bras 1875 {1884} NGV [PA].

Most sources, including the NGV catalogue and AKL 78 (2013), pp.402-3, give the artist’s biographical dates as shown here, although a radically different death date of 1913 appears in Bénézit 7, p.847, and a Christie’s catalogue, London, 21 Nov.1996, lot 259: see http://www.christies.com/lotFinder/lot_details.aspx?intObjectID=1046445). See also http://en.wikipedia.org/wiki/Paul_Joanovitch, and http://www.bbc.co.uk/arts/yourpaintings/paintings/greek-soldiers-with-a-woman-traitor-74961 (reproducing a work in the Brighton and Hove Museums and Art Galleries, England). The only scholarly references available are apparently in Serbian, including a recent monograph/exhibition catalogue: Miroslav Timotijević & Petar Petrović, Paja Jovanović, Beograd: Narodni muzej, 2010 (refer http://www.worldcat.org/title/paja-jovanovic-paul-joanowitch/oclc/755872167); AKL indicates that Petrović has assembled an oeuvre-catalogue (2012) [not seen]