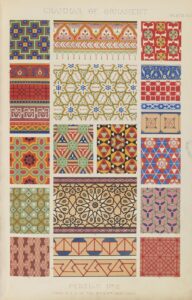 
This famous book featured 112 chromo-lithographed plates surveying the history of design, with a view to distilling principles that contemporaries could use to create their own original designs.

The plates, prepared by Francis Bedford and printed by Day & Son, were meticulously produced using up to 20 separate colours. Waring and Wyatt also contributed to the text. Many of Jones’ original drawings for the book are held in the V&A.

The SLV also holds several later editions, including a copy of the 1868 reprint published by Quaritch, London.

In the catalogue of the 2013 exhibition “Free Secular and Democratic,” the SLV, noting that Edward La Trobe Bateman worked on the preparation of the 1856 book with Jones, adds that “its influence can be seen in his [Bateman’s] decorative schema for Queen’s Hall.”

For Jones’ original drawings, see https://www.vam.ac.uk/articles/owen-jones-and-the-grammar-of-ornament#slideshow=7716019588&slide=0. Among various recent studies of the book, see J.Jespersen, “Originality and Jones’s The Grammar of Ornament of 1856,” Journal of Design History 21.2 (2008)

For the link with the decoration of Queen’s Hall, see https://www.slv.vic.gov.au/search-discover/galleries/free-secular-democratic [all websites cited accessed 5 March 2021]