The NGV’s 1895 annual report describes this work as a “portrait of a St Bernard dog.” The painting, which dates from the artist’s Australian years (1884-1901), was still catalogued as in the NGV in 1943, but no longer appears to be in the collection and cannot be identified.

There are several comparative works by Loureiro, although they raise some interesting complexities that require unravelling. 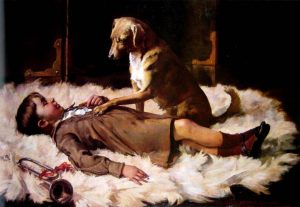 Two Friends (Vasco, and his dog Baron) 1887, appeared at auction in Melbourne several times between 1987 and 1995: see reproduction at right. But the dog shown here is clearly not a St Bernard, as Terry Ingram observed in his report on the Christie’s auction in which it appeared in 1990 – suggesting it looks more like a terrier. Ingram adds that “Baron, who appears in other Loureiro pictures, was a St Bernard belonging to C.S.Paterson, a major collector.” (for Paterson, and Loureiro’s son Vasco, see further details under references, below). 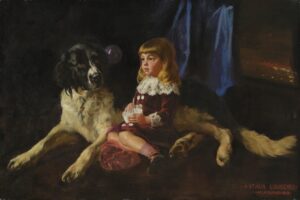 
A second, slightly larger painting also known as Two Friends, but dated 1888, shows a different dog (this time, apparently, a St Bernard) and a different child, identified as the son of the original owner, Charles Staples; this painting appeared at auction in London in 2018 and 2020 (but did not sell).

Exactly how these extant paintings relate to the work bought for Melbourne in 1895 remains to be established, as does the thorny issue (also raised by Ingram in 1990) of how many different dogs were involved, and which ones were named Baron…

The earlier Two Friends canvas (noted as measuring 90 x 133.5 cm) was sold for $40,000 plus buyer’s premium at the Christie’s auction in Melbourne on 4 April 1995, having previously appeared at Christie’s, 31 Oct.1990 and Leonard Joel, Melbourne, 8 April 1987 (not sold): see Australian Art Sales Digest (AASD), available online. See also Terry Ingram’s report on the 1990 auction in the Australian Financial Review, Nov 1, 1990 (https://www.afr.com/life-and-luxury/arts-and-culture/latest-offerings-at-christies-bring-bussell-sales-to-mind-19901101-k454d; accessed 14 July 2020), also commenting on the anomalies regarding the dog, as noted above

Charles Stewart Paterson (1843-1917) arrived in Melbourne in 1872 and founded the firm of Paterson Brothers, specializing in the interior decoration of fine houses and public buildings in Melbourne. He built Grosvenor Chambers at no.9 Collins Street in 1888 (where Tom Roberts and others had their studios): see now Marjorie Tipping’s biography of C.S.Paterson’s younger brother John Ford Paterson (http://adb.anu.edu.au/biography/paterson-john-ford-4372; accessed 14 July 2020). For John Ford Paterson, see also Paterson Fernshaw 1900 {1900} NGV [PA]; and for further entertaining remarks on both J.F.and C.S.Paterson, see also π.o. Heide (2019), pp.129ff.

Vasco, Artur Loureiro’s only son (1882-1918), also known as Louis Vasco, studied art at the National Gallery school in Melbourne (1902-5) and later worked as a caricaturist (a number of his drawings are in the State Library of NSW). He enlisted in the Australian army in 1916, and died in England in August 1918, following a short illness. See now https://trove.nla.gov.au/people/1482737 and https://www.sl.nsw.gov.au/stories/vasco-loureiro-louis-vasco (both accessed 20 March 2020)