A significant French academic sculptor, Mercié was Professor of Drawing and Sculpture at the Ecole des Beaux-Arts.

The NGV’s Annual Report for 1891 lists this work as acquired together with * Mackennal Triumph of Truth {1891} Loc? [SC], a plaster model produced for the competition to find a suitable work to accompany Boehm St George 1887 {1888} SLV [SC] outside Melbourne’s Public Library.

The present work is not listed among the 14 entries for the 1891 competition published at the time. However, it is described in NGV 1894 as designed “to the order of the Trustees of the Public Library.” It seems likely to have been a variant or copy of Mercié’s famous 1877 group Genius of the Arts, a high relief work in copper, located on the Louvre façade: reproduced below. 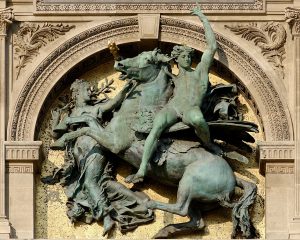 It also seems likely, to judge from the reproduction of Mackennal’s 1891 model published at the time (see * Mackennal Triumph of Truth {1891} Loc? [SC]), that the local sculptor relied to a significant extent on Mercié’s example, in view of the similarities between the poses of horse and rider in both groups.