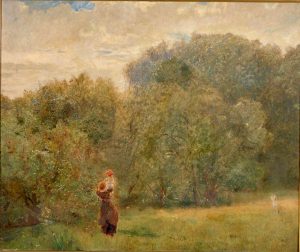 The 1894 NGV catalogue quotes at length from Herkomer’s enthusiastic endorsement of North: “I can safely say that he is the only landscape painter of the day that can be called a colourist. His art is not for the general public; it is for the few.”

NGV 1894 also notes that North, elected an associate of the RA in 1893, had earlier been a close colleague of Frederick Walker: see Walker The Right of Way {1891} NGV [PA], also bought on Herkomer’s advice, as was North The Little Copse on the Hill 1891 {1892} NGV [WT], a contemporary watercolour.