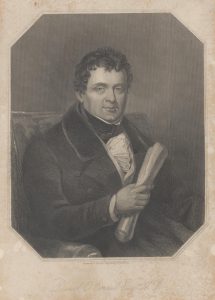 The inscriptions identify the sitter and the artists involved. O’Connell (1775-1847), known as the “Irish Liberator,” famously campaigned for Catholic emancipation; there was also a plaster bust of him in the pre-Felton collection.

Stewart portrayed Queen Victoria, Dickens and other noted figures of the era.

Like Robinson after Selous Surrender of Calais {1868} NGV [PR], this print is extensively foxed.