This print is attributed to Russell in NGV 1894, but NGV 1905 lists it as anonymous.

the SLV holds several of his watercolours and pencil drawings of the rocky falls on the river Yarra, where he had a cottage (see e.g. SLV H38131/2, a pencil sketch dated 1881, but inscribed as “from sketch 1837”: see comparative reproduction below). The falls were removed when Queen’s Bridge was built over the Yarra in the early 1880s. 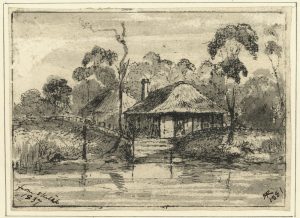 See SLV catalogue for details regarding Russell’s other images; the sketch reproduced here is from the Currie collection of his drawings

See also NGV catalogue for other works by Russell