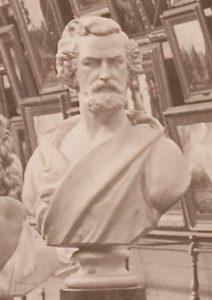 The bust of Summers donated by Scurry in 1884 was presumably identical with the sculpture he exhibited at the 1880-81 Melbourne International Exhibition. Many thanks to Summers researcher Jennie Maggs for alerting me to the fact that the sculpture was by Scurry himself, and identifying it in the photograph of the Victorian Picture Gallery at the 1880-81 exhibition (as shown here).

This appears to have been the only sculpture by Scurry in the pre-Felton collection, despite the fact that he worked predominantly in that medium in Melbourne for over 30 years following his arrival in 1853, including a period during which he assisted Summers (refer linked artist entry for further details).