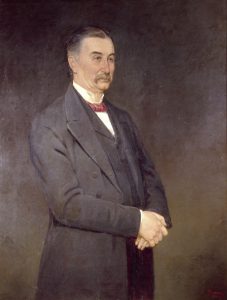 An influential critic and commentator on the fine arts in Melbourne throughout the pre-Felton era, Smith consistently proclaimed the view (shared by Redmond Barry and others) that art should be an improving force in society, clearly exhibiting moral values.

Virtually an exact contemporary of Queen Victoria, Smith  exemplified the Victorian age and its “cardinal virtues”: “determination, hardness, energy, persistence, thoroughness and inflexibility” (Peter Ackroyd 2019). But, as his biographer Lurline Stuart has emphasized, he was also a man of varied passions, and an engaged contributor to Australian culture over a long career.

After training as a journalist in England, Smith migrated to Australia in 1854, and began working for the Melbourne Age, later joining the Argus as its art critic. He immediately announced himself as an active advocate for the artistic development of the young colony, giving public lectures and calling for the establishment of a National Gallery as early as 1856.

Following the subsequent decision to add an art collection to the Melbourne Public Library, Smith became closely involved in its formative development. He was a member of the Fine Arts Commission established in 1863, and wrote approvingly in 1864 of Chevalier The Buffalo Ranges, Victoria 1864 {1864} NGV [PA]. He also wrote a glowing review of the Public Library’s collection of classical casts (Argus, 7 June 1865).

During the 1860s and 70s, Smith was also a strong supporter of the landscape painting of both von Guérard and Buvelot, and was also one of the first to appreciate the work of the young Tom Roberts (1881).

However, he later came into direct conflict with Roberts and his contemporaries, after likening the paintings in the 9 x 5 Exhibition to “the incoherent images which float through the mind of a dyspeptic dreamer” (Argus, 17 August 1889). Smith was a particularly influential figure at the time, as both a respected critic and Treasurer of the MPL Trustees, and his attitude may have proved a major impediment to the NGV’s acquisition of works by the Australian Impressionists, especially Roberts, the first of whose paintings entered the collection only in 1920.

A Trustee of the National Gallery Committee for many years, Smith became its Chairman in his final decades, and clashed on several occasions after 1892 with Bernard Hall, whose fin-de-siècle tastes were clearly not to Smith’s liking (both Cox and Poynter quote instances).

By the late 1890s, Smith had retired as an art critic, while continuing to write occasional pieces and drama reviews for the Age until his death at the age of almost 90.

Smith’s 1865 review of Melbourne’s cast collection is quoted in the introductory text on Ancient art. His 1889 review of the 9 x 5 exhibition, and the subsequent correspondence between him and Roberts et al., are reprinted in Bernard Smith (ed.), Documents on Art and Taste in Australia, Oxford UP, 1975, pp.202ff., and have been discussed frequently over the years: see e.g. Terence Lane & others, Australian Impressionism, NGV, 2007 (exh.cat). Roberts’ Penelope, painted in 1919, was the first of his paintings to enter the NGV collection (Felton Bequest 1920): see https://www.ngv.vic.gov.au/explore/collection/work/2913/ (also reproducing the frame, made in 1919 by Roberts’ wife, Lillie Williamson)