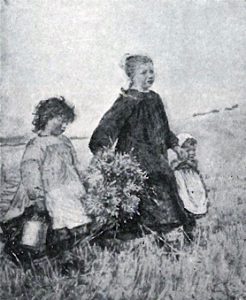 The 1894 catalogue quotes Herkomer’s praise of the artist’s sensitive handling of this subject, indicating that the work was shown at the Royal Academy in 1891. Herkomer added that Smythe belonged to the same landscape “school” as North and Walker (see Walker (F.) The Right of Way {1891} NGV [PA]).

Not reproduced in current NGV catalogue