In 1504-5, Michelangelo produced a full-scale cartoon of the battle of Cascina, at which the Florentines defeated the Pisans, in 1364, thus securing access to the Mediterranean via the Arno. It was designed for his proposed fresco in the Great Hall of the Palazzo Vecchio, Florence, intended to match Leonardo da Vinci’s Battle of Anghiari on the opposite wall. In the end, neither fresco eventuated.

What form the work listed in NGV 1905 took is unclear; it may have been an autotype reproduction, or a print based on the Sangallo copy, which was also reproduced by various later engravers, e.g. Schiavonetti – for whom, see * Schiavonetti after Phillips William Blake {by 1894} Loc? [PR]. 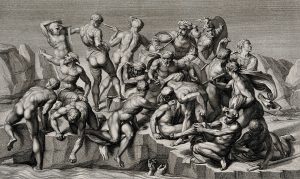