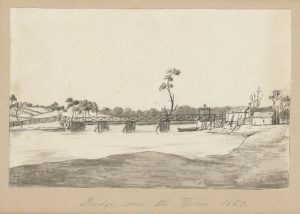 Both NGV 1894 and 1905 give the title and date of this anonymous sketch as shown here (on the mount, it is dated and titled “Bridge over the Yarra”).

It documents Melbourne’s first bridge, built in 1844; a toll was charged by the lease-holder, Robert Balbirnie. In 1850, it was replaced by the first Princes Bridge (superseded by the present structure in 1888). For another image of the original bridge, see also Strafford Police Station, Richmond Paddock {1888} SLV [DR].

The rather spindly trees are reminiscent of those in the early Melbourne views of George O’Brien, although this work looks rather more amateurish than works on paper reliably attributed to that artist. George Strafford is another possibility; his trees are also similar.