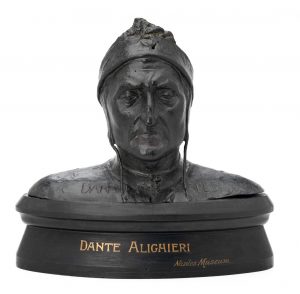 In this case, the original is the famous image of the author of the Divine Comedy in the Capodimonte Museum, once attributed to Donatello, but now seen as 16th-century Italian work.

According to Richard Thayer Holbrook (1911): “Among persons of well-developed taste who are not particularly influenced by questions of authenticity, this bust seems to have won more favour than any other possible likeness of Dante. It is in truth nobly Dantesque.”

In the vestibule of the State Library, as arranged in 1905, this replica was installed near Charles Summers’ marble busts of Redmond Barry and Charles Perry, implying some heady associations.

For the Naples bronze, see http://cir.campania.beniculturali.it/museodicapodimonte/itinerari-tematici/galleria-di-immagini/OA00814587

The quote is from Holbrook’s Portraits of Dante from Giotto to Raffael: A Critical Study, London: Philip Lee Warner / Boston & New York: Houghton Mifflin, 1911, p.57 (this book is held in the SLV)