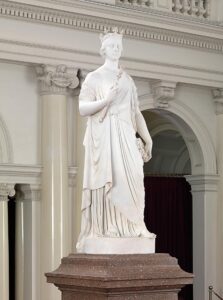 Queen Victoria, who reigned for 64 years (1837-1901), was a strong presence in the pre-Felton gallery, although she never visited Australia. Several images of her and her family were held in the collection, and in 1893 she donated a fascinating group of etchings made by herself and Prince Albert in the 1840s.

Works by a number of her favourite artists, including Sir Joseph Boehm and Marshall Wood, were also acquired for the collection in the period.

In a deeper sense, the pre-Felton NGV was also permeated by the values and attitudes of the era that came to be named after the Queen, also a strong symbolic presence throughout Australia during her reign.

“Victorian values” are summarized pithily in the opening chapter of Peter Ackroyd’s Dominion (2018), volume 5 in his history of England. Noting renewed optimism in the 1820s, as evidenced shortly afterwards in Charles Dickens’ lively fictional characters, Ackroyd singles out pluck, independence, duty and work as highly valued personal traits, and continues: “The qualities needed were determination, hardness, energy, persistence, thoroughness and inflexibility… [all] cardinal virtues of the coming Victorian era.” These characteristics, and typical Victorian themes and paradoxes – industrial/rural life, prudishness/sexual obsession, religiosity, sentimentality, battles (especially naval battles), Orientalism, and so on – are all exemplified in works acquired for the pre-Felton collection.

Australia occupied a key position in the 19th-century British empire, a fact ignored in Ackroyd’s otherwise very fine book. As the colony’s convict origins faded into the past, British attention shifted to pastoral concerns, with English farmers encouraged to emigrate: see now Taylor Part of the Harbour of Port Jackson 1823 {1901} SLV [PR]. Victoria, first settled by sheep farmers, was galvanized by the discovery of gold, shortly after formal separation from New South Wales in 1851, making the colony a magnet for fortune-hunters, including a number of artists (Charles Woolner, Ludwig Becker, and many others).

“Marvellous Melbourne,” as the rapidly expanding city was dubbed in 1885 by visiting British journalist George Sala, reflected the new prosperity that followed the gold-rush, as did the expanding Public Library/NGV and a number of major international exhibitions held in the city during the period. As Asa Briggs recognized in his Victorian Cities (1964), Melbourne had become one of the urban jewels in the crown of the British Empire. 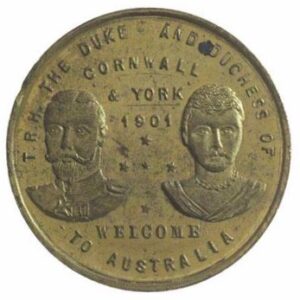 However, the turn of the new century brought sudden change. One of Queen Victoria’s last official acts was to give her royal assent to the Commonwealth of Australia Constitution Act (UK), on 9th July 1900. The Act was proclaimed in Sydney on 1st January 1901. The Queen died on 22nd January (aged 81). And on 1st May, the First Commonwealth Parliament of Australia opened in Melbourne’s Royal Exhibition Building, attended by the Duke and Duchess of Cornwall and York (the Duke was the new King Edward VII’s son and the future King George V).

[photo: Stokes & Son, Medal coined to commemorate the visit of the Duke & Duchess of Cornwall & York in 1901 (Museums Victoria)]

See in particular Vaughan “Queen Empress” (2013), for detailed analysis of images of Queen Victoria in 19th-century Melbourne; Wood’s Parliament House statue, completed after his death, is reproduced as fig.5. For the medal reproduced above (Museums Victoria NU 33088; McArthur Bequest 1903; transferred from the NGV in 1976; the obverse shows Edward VII), see also https://collections.museumsvictoria.com.au/articles/3433 (an article by Richard Gillespie on the McArthur Bequest). For the opening of Parliament, see also Nuttall [after] First Commonwealth Parliament of Australia 1902 {1903} SLV [PR]. See also Ackroyd Dominion (2018), p.2 (quoted); and Graeme Davison, The Rise and Fall of Marvellous Melbourne, Melbourne UP, 1978 (and later revisions)