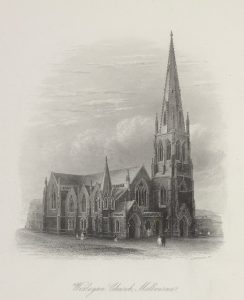 As with * Willmore (A.) after Gill Collegiate Grammar School {1868} Loc? [PR], this is a provisional identification of a work documented as acquired for the Melbourne collection in 1868 (identified simply as an anonymous image of the Wesleyan Church in Melbourne). The Wesley Church was designed by Joseph Reed and built 1861-70.