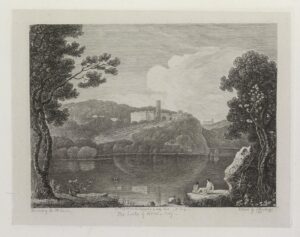 A noted landscape painter, Wilson was a foundation member of the Royal Academy (1768). The NGV holds several accepted examples of his work (acquired after 1904/5), and also Wilson [manner of] Landscape with Italian buildings {1904} NGV [PA], selected from Alfred Felton’s own collection as an autograph work, but later regarded as a work from his circle of influence.

Hastings (1778-1854), a British naval officer and later a customs officer, was also an amateur painter and printmaker who produced a number of etchings after Wilson, in some cases via his own oil copies. The present volume contains 40 etchings after landscapes mostly owned by Marianne, Lady Ford (inherited from her father), together with an etched caricature portrait of Wilson, “traced from an original sketch made from life by Sir Geo.Beaumont,” as the frontispiece.

Marianne Yule (2015) describes the etchings as “a labour of love for Wilson’s art,” also noting that Constable owned proofs of a number of them. The prints in the SLV copy are all stamped in one corner with the oval MPL stamp.