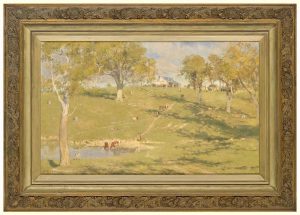 Withers migrated to Australia in 1882, and, took night classes at the National Gallery School, where he met Roberts and McCubbin. At Roberts’ urging, he studied at the Académie Julian in Paris (1887-8), and then, back in Melbourne, became a member of the so-called Australian Impressionist movement.

In 1890, he rented the Heidelberg mansion of Charterisville (originally built by David Charteris McArthur, after whom the NGV’s McArthur Gallery was named), sub-letting cottages to Humphrey (see Humphrey Under a Summer Sun 1895 {1895} NGV [PA]) and other artists. He then moved to Cape Street, Heidelberg, where he painted what are generally regarded as his best works, including the present painting. In his final years (1912-14), the artist served as an NGV Trustee.

This was the first of Withers’ pictures to enter the collection, although both the 1895 annual report and the gallery’s stock-book note that it replaced Hall’s original choice, a slightly smaller painting, A Bright Winter’s Morning (1894), purchased from the Victorian Artists’ Society in January 1895 for £31/10. Hall evidently changed his mind, and exchanged the work (paying the slightly higher price of £52/10), in line with one of his more idiosyncratic policies, that only one work by a living artist should be held in the NGV: see also McCubbin A Winter Evening 1897 {1900} NGV [PA].

A Bright Winter’s Morning, another significant example of Withers’ mature style, eventually also entered the NGV collection later (through a 1956 bequest), together with a number of his other works, acquired after 1905.

The original frame of the present work, made by a local firm of artists’ suppliers, the Artistic Stationery Company, was one of a number sold off by the gallery in 1941; it was re-acquired from the Western Australian monastery of New Norcia in 2000, and restored in 2001.