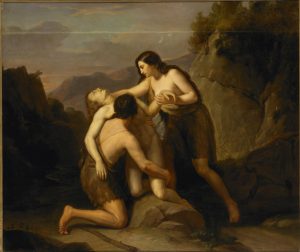 The 1875 NGV catalogue indicates that this classicizing work was bought on the advice of Summers, presumably in Rome, where the sculptor and the Sicilian-born painter both had their studios.

Thomson quotes Summers’ comments regarding both the present work and also * Innocenti Italian Peasants {1870} Loc? [PA], including the somewhat cryptic remark: “I replied… to the effect that if he {Williams?} is of opinion that this specimen of the nude is not too suggestive for the colonial taste, to purchase it.” This presumably referred to the present canvas, which Summers described as “very clever… and a good specimen of the modern Italian school. The price is very moderate, £70.” Carta worked in Rome from 1839, and was appointed Professor of Painting at the Accademia di San Luca in 1848.

Sonia Dean (1995) notes that Bernard Hall listed this work in 1900 as an example of previous purchases on the advice of “irresponsible artists” (referring to the advice of Chas Summons {sic}).


For Summers’ remarks, see Thomson, “The Public Gallery of Art” (1869); with thanks to Jennie Maggs (Summers researcher). See also Dean European paintings of the 19th and early 20th centuries (1995), p.35