Charlotte (1840-1927), daughter of King Leopold I of Belgium and sister of Leopold II, married her cousin, Archduke Maximilian of Austria, in 1857.

In 1864, Maximilian was installed by Napoleon III as Emperor of Mexico, recently invaded by the French, and Charlotte took the name Carlota. However, the French almost immediately withdrew; Charlotte returned to Europe, making unsuccessful attempts to enlist support from others; and Maximilian was captured and shot in Mexico in 1867. For his execution , which horrified Queen Victoria and others, see Manet’s well-known painting (Kunsthalle, Mannheim, 1868-69; and other variants and studies).

In precarious health (she allegedly went insane), Charlotte lived the rest of her life in Trieste and then Belgium, as “Her Imperial Majesty Empress Charlotte of Mexico, Archduchess and Princess of Austria, Princess Royal of Hungary, Bohemia and Croatia, Princess of Belgium, Princess of Saxe-Coburg-Gotha, Duchess of Saxony.”

This print was apparently produced in 1867 after a portrait made at the time of her marriage in 1857. 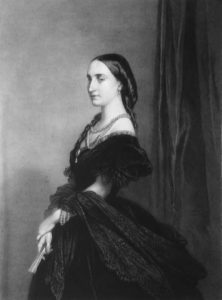 For the impression shown here, see http://www.gogmsite.net/empress_carlota/1857_empress_carlota_by_j_f.html (after a painting said to be in the Musée de la Dynastie, Brussels). For Charlotte, see e.g. https://en.wikipedia.org/wiki/Carlota_of_Mexico; and Linda MacNayr, “Situating Charlotte” (PhD, Queen’s University, Ontario, 2008), available online; an impression of the present print is reproduced as fig.3.8, p.122. MacNayr also reproduces and discusses various other portraits of Charlotte, by Gallait (Buckingham Palace, 1846), Winterhalter and others