Léopold acted as an intermediary between other European powers, and broked the marriage of Queen Victoria and Prince Albert (and is also said to have promoted Albert as the effective King of England). He was succeeded by his highly unpleasant son (ruled 1865-1909): see now * Unknown after Ghémar Frères Léopold II & Marie-Henriette of Belgium {by 1894} Loc? [PR].

Baugniet was appointed Belgian court painter in 1841, but later transferred to London, where he became a successful portraitist, painting Prince Albert (in 1851), amongst many others. After 1860, he worked in Paris. The NGV holds another lithograph by Baugniet, his portrait of David Roberts (acquired through the Felton Bequest in 1926). 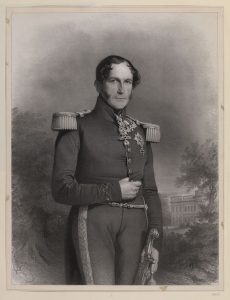 Either this print or * Warnots (?) after Ghémar & Severin Léopold I, roi des Belges 1856 {by 1894} Loc? [PR] was listed in AR 1870-71 as presented by Leopold himself, hence before 1865 (both prints were catalogued in NGV 1894). Other impressions of the present print are held elsewhere: see e.g. the British Royal Collection example reproduced here.

For the impression reproduced here, see https://www.rct.uk/collection/612101/leopold-i-king-of-the-belgians?language=ja (noting size and date and shown above). For the sitter, see e.g. https://en.wikipedia.org/wiki/Leopold_I_of_Belgium; for his supposed role in grooming Albert as an alternative monarch to Victoria, see e.g. https://www.historyextra.com/period/victorian/queen-victoria-marriage-prince-albert-unhappy-husband/ (accessed 2 June 2020)