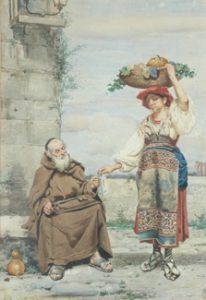 [photo at right: work as auctioned in Melbourne, 2009]

This is one of five watercolours by Guardabassi bought in Melbourne in 1883, together with several views of Rome by Gigli.

This work (whose Italian title means “Charity”) is almost certainly identical with a Guardabassi watercolour auctioned by Leonard Joel in December 2009, showing a woman giving money to an old friar (reproduced here).

Of the other examples bought in 1883, only Guardabassi The Venetian Senator {1883} NGV [WT] remains in the collection.