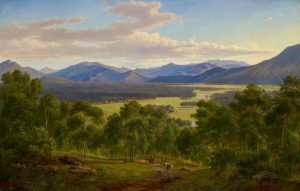 This work, the earliest of von Guérard’s works acquired for Melbourne, was donated together with Gritten View on Jackson’s Creek 1866 {1866} NGV [PA] (for Michie, see linked entry).

This canvas is a variant of a smaller canvas (now also in the NGV, acquired with the Joseph Brown Collection in 2004), painted in 1863 on the basis of a sketch made during the artist’s Kosciusko expedition with Georg von Neumayer in 1862: see now Guérard Mount Kosciusko 1866 {1870} NGV [PA].

In the pre-Felton NGV, the present canvas was displayed near or directly beside Chevalier The Buffalo Ranges, Victoria 1864 {1864} NGV [PA], enabling visitors to make their own direct comparison between von Guérard’s luminous view of the Victorian landscape and Chevalier’s more obviously Romantic imagery.  Redmond Barry, for one, expressed a clear preference for von Guérard over Chevalier, in remarks he made in 1864 (cited in the entry on the Chevalier painting).