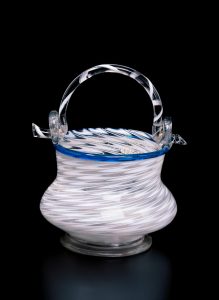 Almost all the Italian glass acquired for Melbourne in the pre-Felton period was Venetian, the majority of pieces produced in the 1870s and 1880s by the Venice & Murano Glass and Mosaic Company [DA], a leading force in efforts to revive the once-famous Venetian glass industry.

However, some earlier examples were also acquired, notably the group of “102 specimens of Murano glass, purchased by Mr Thompson for the Gallery. Price £129 17s 7d” (AR 1871, p.41), almost all of them still extant in the NGV. The price quoted is remarkably small by comparison with other amounts paid during the same period, especially for paintings, e.g. £630 for Long A Question of Propriety 1870 {1871} NGV [PA].

Geoffrey Edwards (1998), quoting the relevant NGV stockbook, notes that the 1871 glass selection was actually made, with Italian government approval, by Abbot Vincenzo Zanetti (1824-83), the key figure behind the establishment of the Museo Vetrario at Murano in 1861.

A few of these pieces date from the 16th century, e.g. the basket in latticinio or filigreed glass, reproduced here, one of the examples included in the NGV’s “Liquid Light” exhibition (2019). However, the bulk of them are 18th century work, mostly plain or simply decorated domestic glassware and – apart from a few pieces ascribed to known glassmakers and decorators Giuseppe Briati and the Brussa family – by un-named makers.