Either this print or * Baugniet Léopold Prémier, roi des Belges {by 1894} Loc? [PR] was presented to the Melbourne collection by Leopold himself sometime before he died in 1865 (see the entry on the other print for further information, including biographical information). Both prints are listed in NGV 1894.

NGV 1894 indicates that the present print was “lithographed by Simonau and Toovey after a drawing by G.L.Ghémar.” However, the inscriptions on another impression, in the British Royal Collection, help to provide more accurate details: “Lith par Warnots d’après la Photographie de Ghémar & Severin… Imp.Simonau & Toovey… Bruxelles, J.Géruzet éditeur”: see photo below.

Ghémar worked initially as a draughtsman and lithographer, subsequently turning to portrait photography, like his famous friend Nadar (1820-1910). In 1854, Ghémar opened a photographic studio with Severin in Antwerp, transferring to Brussels in 1856. The present lithograph, also probably drawn by Warnots (about whom little is known), and printed by Simonau & Toovey, was based on a studio portrait taken on the occasion of the Belgian king’s silver jubilee in 1856 (see Hannavy 2008). 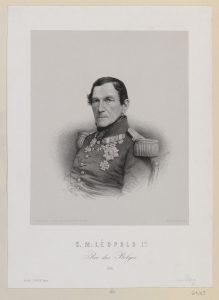 For the impression reproduced here (Royal Collection, RCIN 612103), see https://www.rct.uk/collection/612103/s-m-leopold-1er-roi-des-belges (with date and other details as shown above, including dimensions). For information on Ghémar and Severin, see the entry on Ghémar by Steven Joseph in John Hannavy (ed.), Encyclopedia of Nineteenth-Century Photography, Vol.1 (A-I), Routledge, 2008, pp.588-90 (available through Google Books). See also the entries on Ghémar in AKL 52 (2006), pp.493-94 (noting that he and Severin had a photographic atelier in Brussels from 1860), and Bénézit 6, p.103

For Brussels printers Gustave Simonau (1811-70) & William Toovey, and publisher Jules Géruzet, see https://www.britishmuseum.org/research/search_the_collection_database/term_details.aspx?bioId=162359, noting that Toovey was the brother of British painter Edwin Toovey: see now * Toovey Flamborough Head {1875} Loc? [PA]. The British Museum catalogue also provides some sketchy details on Warnots, about whom little else appears to be recorded (he is not listed in Bénézit)